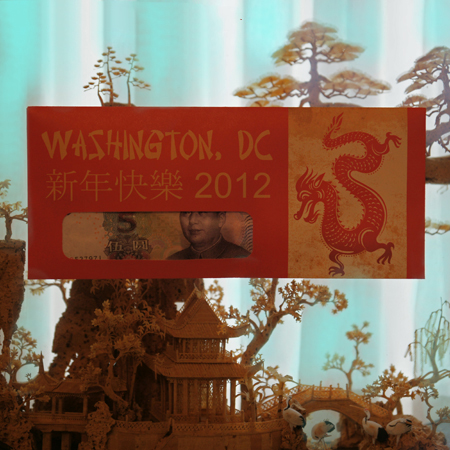 Symbolizing good luck, the color red used on the Chinese red envelope is used in nearly every celebration or noteworthy occurrence in many cultures in the Far East: mainly China, but also Vietnam, Thailand, Myanmar and the Philippines, among others'. Traditionally it is also sign of love and respect for one's family members.

As the Chinese Valentine's story goes, once there was a cowherd, Niulang, who lived with his elder brother and sister-in-law. But she disliked and abused him, and the boy was forced to leave home with only an old cow for company. The cow, however, was a former god who had violated imperial rules and was sent to earth in bovine form. One day the cow led Niulang to a lake where fairies took a bath on earth. Among them was Zhinu, the most beautiful fairy and a skilled seamstress. The two fell in love at first sight and were soon married. They had a son and daughter and their happy life was held up as an example for hundreds of years in China. Yet in the eyes of the Jade Emperor, the Supreme Deity in Taoism, marriage between a mortal and fairy was strictly forbidden. He sent the empress to fetch Zhinu.

Niulang grew desperate when he discovered Zhinu had been taken back to heaven. Driven by Niulang's misery, the cow told him to turn its hide into a pair of shoes after it died. The magic shoes whisked Niulang, who carried his two children in baskets strung from a shoulder pole, off on a chase after the empress. The pursuit enraged the empress, who took her hairpin and slashed it across the sky creating the Milky Way which separated husband from wife. But all was not lost as magpies, moved by their love and devotion, formed a bridge across the Milky Way to reunite the family. Even the Jade Emperor was touched, and allowed Niulang and Zhinu to meet once a year on the seventh night of the seventh month, and this is how Qixi came to be. The festival can be traced back to the Han Dynasty (206 BC-AD 220).

There are no clear sources which document the origin of the red envelope tradition. In China, during the Qin Dynasty, the elders would thread coins with a red string. The meaning of the monetary gift is translated as "money warding off evil spirits," and was believed to protect people from sickness and death. The yāsuì qián was replaced by red envelopes when printing presses became more commonplace.

All items are insured and delivered to your home by the United Parcel Service. UPS is committed to doing "absolutely, positively" whatever it takes to deliver your item to you.

One of our top selling products, the Romeo and Juliet Lovers Chest comes with beautiful vanilla-scented rose petals.

Ever since the year 500 AD, people have been celebrating Valentine's Day by bestowing messages and flowers to the object of their wanton desire. Flash forward a millennia or so and Unique Valentine Gift presents this Love Message and Heart Box combination.

Capture the sweetness of your valentine with our real preserved pink rose safeguarded in a clear glass ornament globe. The pink blush petals will remain supple and elegant for years to come, providing a constant reminder of your love.